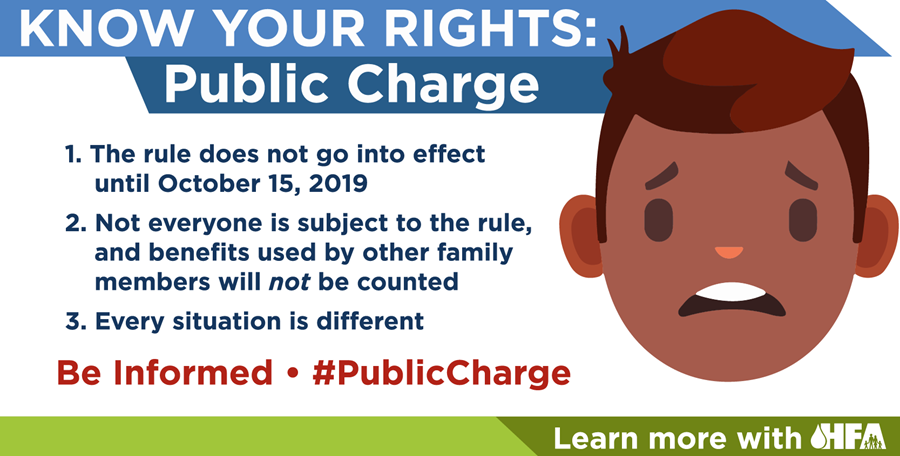 The “Public Charge” rule change being discussed right now at the national level is causing concern among patient advocates who anticipate legal immigrants will not get the health care they need due to the change. “Public Charge” has been a long-standing part of immigration policy, but the Department of Homeland Security (DHS) recently modified the policy on August 12, 2019 to expand the definition of who is a “public charge”. Formerly, an immigrant was considered a “public charge” if they were dependent on the government to survive, such as requiring cash-aid to support their income (‘welfare’/ SSI) or long-term care paid for by the government.

Now “public charge” has been expanded to include immigrants who accept help from critical safety net programs such as Medicaid, SNAP, or Section 8 housing vouchers. Under the new rule, if a legal immigrant uses these safety net programs for more than a total of 12 months within 3 years, it may count against them when they apply to become a permanent U.S. resident, when they seek to enter the US, or when they need to re-enter the US after leaving for a trip. Undocumented immigrants already did not qualify for these programs.

Some important quick facts to keep in mind:
-The rule did not go into effect until October 15, 2019.
-Not everyone is subject to the rule, and US citizen family members (For example: kids who were born in the US) are still entitled to benefits such as SNAP, housing assistance, etc.
-Every situation is different.

For more details about the changes DHS is making to the “Public Charge” rule in immigration policy, read the full article from HFA “New Rule Causes Concern Over Legal Immigrants’ Use of Medicaid and Certain Other Public Benefits”. http://bit.ly/Public_Charge
¡También está en español!