A Terri Cowger Hill Tribute-With Memories & Quotes from the Community 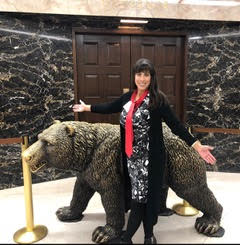 Terri joined the Hemophilia Council of California (HCC) in 1993 as our first Legislative Advocate.  Almost immediately after starting with HCC, in 1994 Terri helped us achieve the first California Children’s Services (CCS)  protection bill signed into law as a co-sponsor of SB 1371 (Bergeson & Lee).  That bill kept the CCS Program outside of Medi-Cal Managed Care plans, and still today, with the exception of the Whole Child Model Pilot Counties, most CCS patients are not in managed care.

In 1995 Terri was instrumental in helping HCC launch our first ever Legislative Day, a yearly advocacy day we have held ever since.  In some of our most highly-attended years, the number of advocates has swelled to more than 120 community members, a huge accomplishment with this rare disease community.

Terri later worked with HCC’s hugely influential Executive Director Val Bias in the 2000s to establish our flagship Future Leaders Program and our Health Care Access Forums, both key parts of HCC’s work today.  Terri’s collaboration on calls with the HTCs and national hemophilia organizations such as NHF and HFA have also provided critical support to HCC’s collaborative efforts with our partners in the bleeding disorders space.

Between 1998 and 2016, Terri led our legislative push to continue CCS protections and carve outs.  Because of this work, CCS patients were guaranteed their factor.  Key bills included the HCC-sponsored 2012 Clotting Factor Standards Bill (AB 389/Mitchell) and the 2013 CCS Protection bill (AB 1301/Pan), which HCC co-sponsored.  Due to Terri’s advocacy, in 2014 clotting factor was “Carved Out” of Medi-Cal Managed Care Plans in California per DHCS’ then-Director Toby Douglas.  At the time, hemophilia was the only disease group in CA to get this special treatment (until Medi-Cal Rx in 2022!)

In more recent years, Terri’s work for HCC has included monitoring and advocating on behalf of our community during the implementation of the CCS Whole Child Model Pilot, the COVID-19 Public Health Emergency telehealth expansion and most recently Medi-Cal Rx and CalAIM. 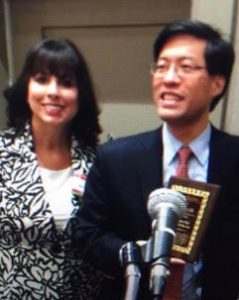 It would be impossible to list all of the amazing bills and issues Terri has made possible during her 29 years with the Hemophilia Council of California.  Today, we celebrate all she has accomplished over her time with HCC.

While Terri is making some changes to her client list in 2023 and will no longer be representing HCC she will always be a valued friend and ally to the bleeding disorders community.

Terri, we are going to miss your guidance, support, and positive attitude. Although we are sad you are leaving us, we are happy to know you’ll now have more time for your family and other endeavors. Thank you for your excellent service to not just HCC but to the entire California bleeding disorders community!

A few words from people at HCC who knew Terri well-

With Sincere Appreciation and Profound Gratitude,

-Chris McAlister and Mason, An HCC Future Leader and his mom